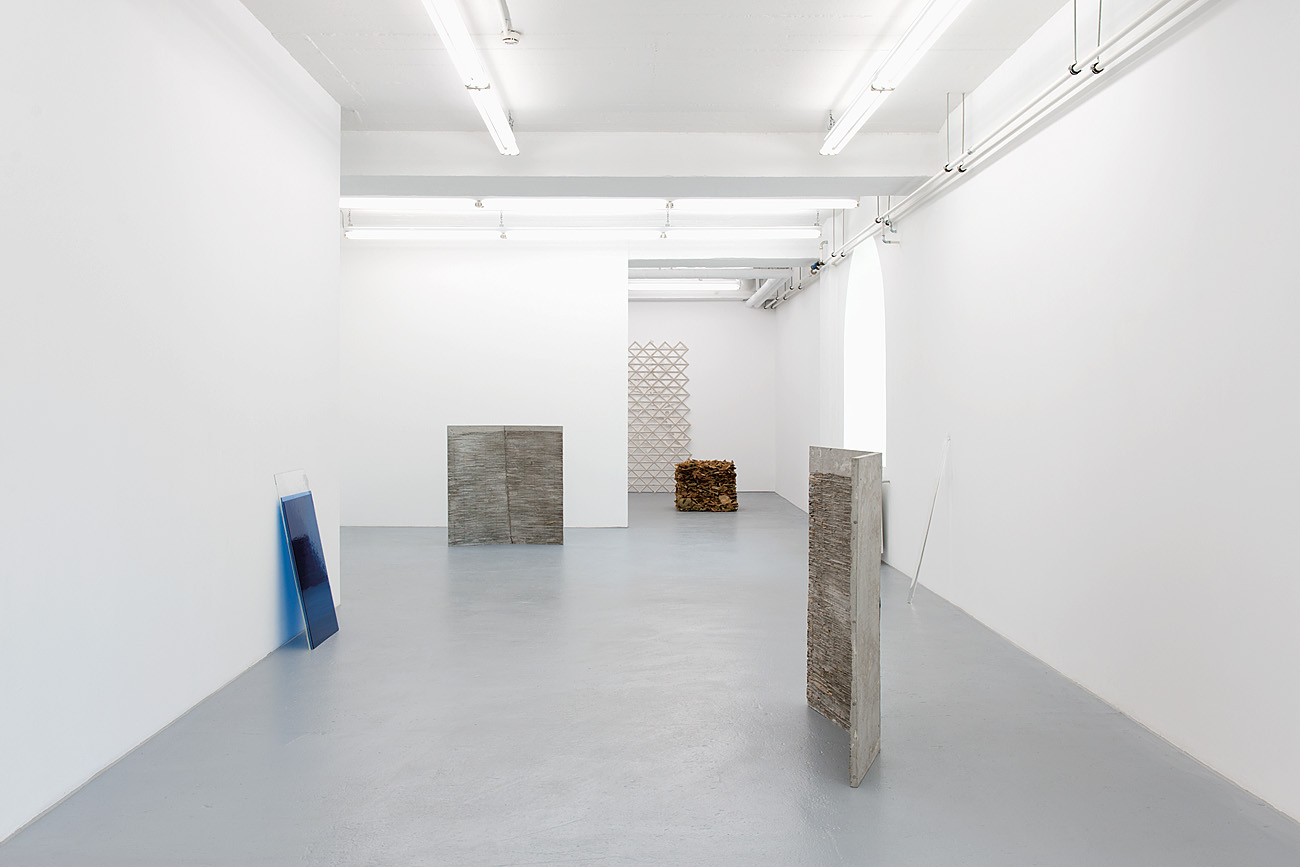 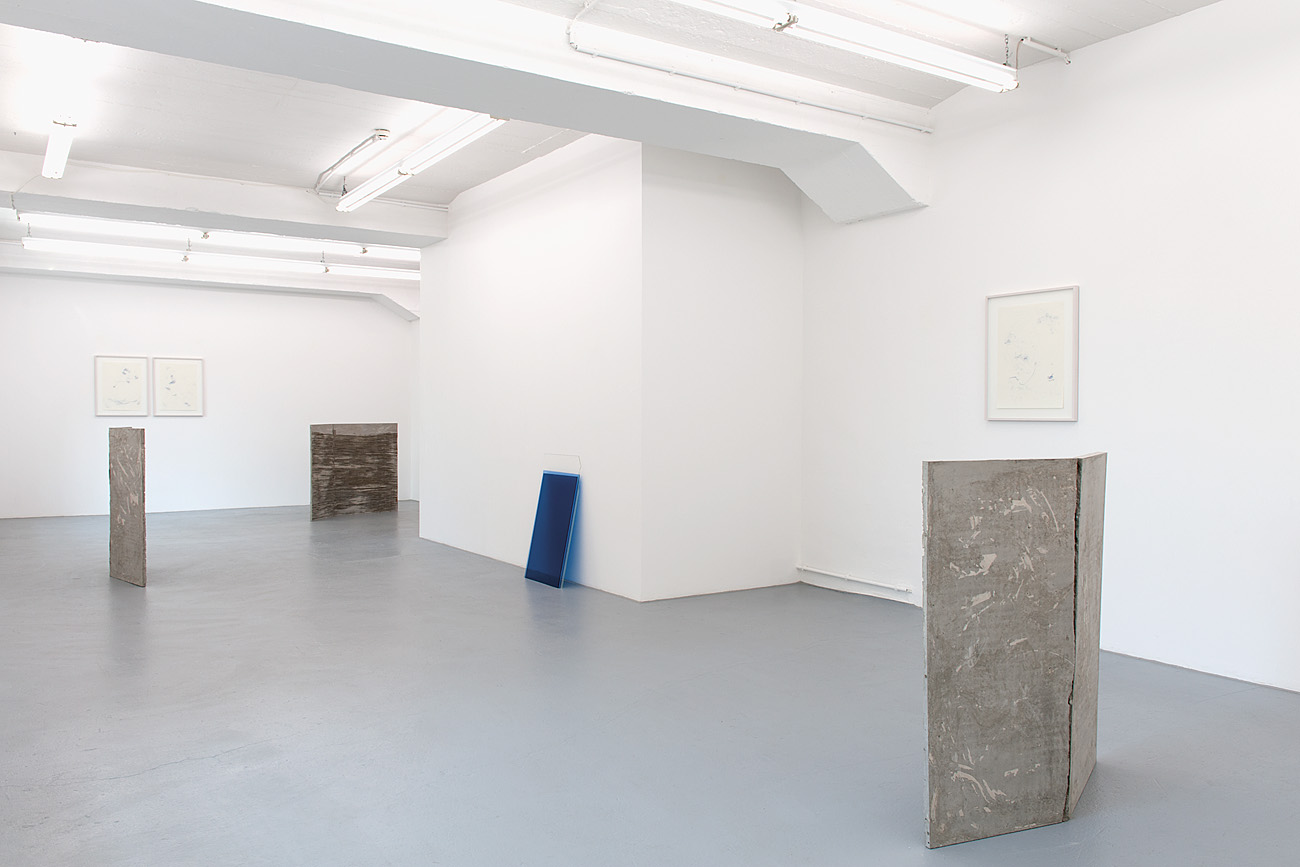 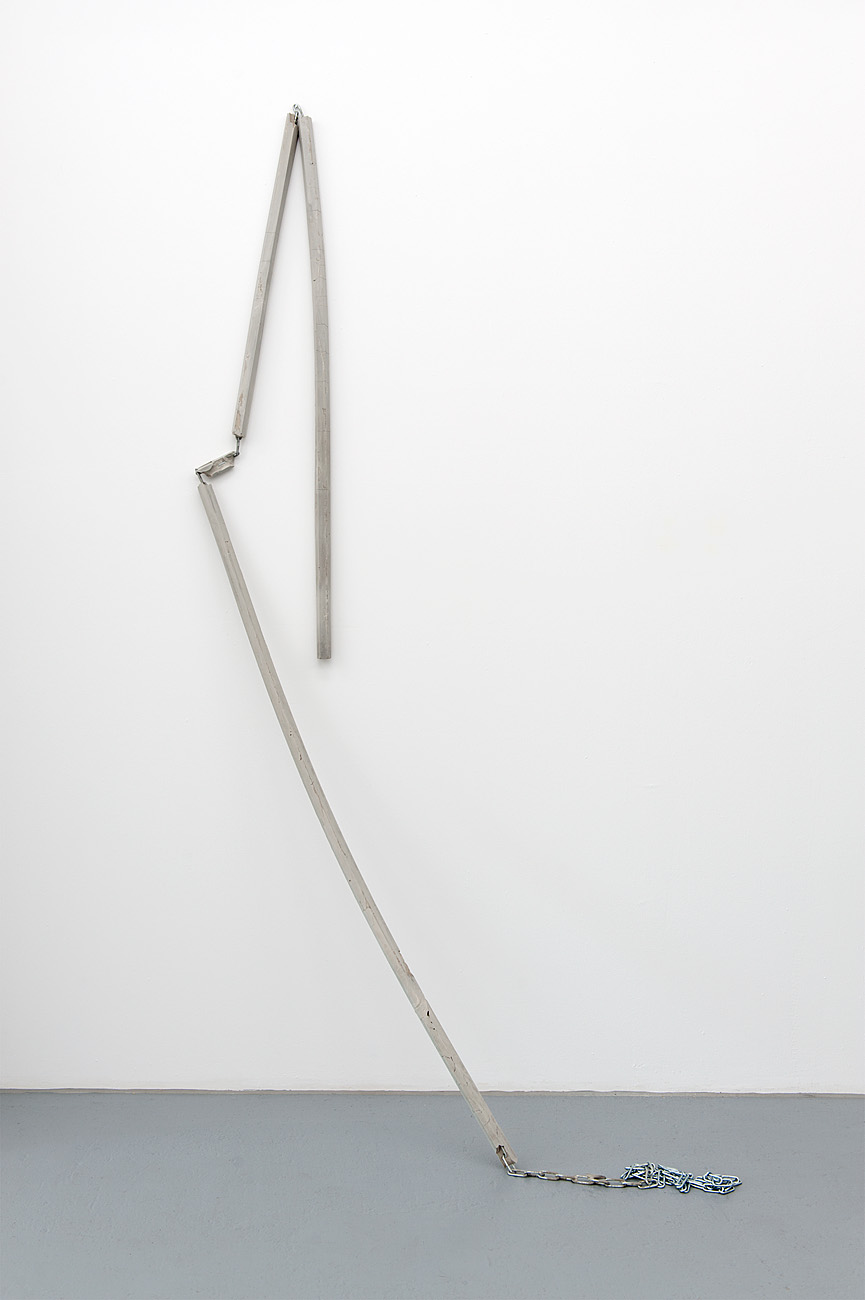 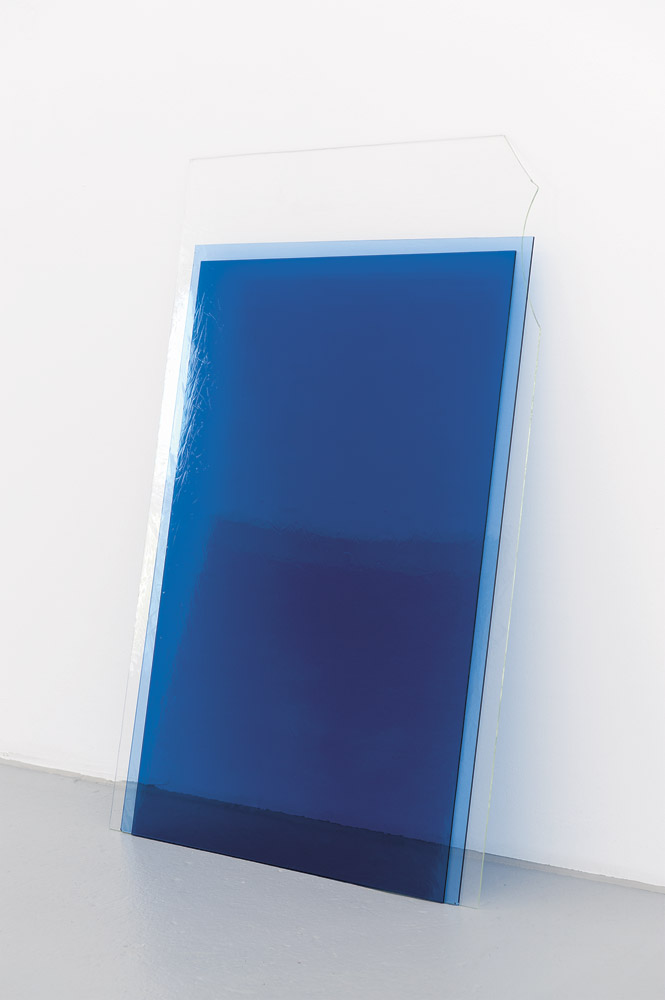 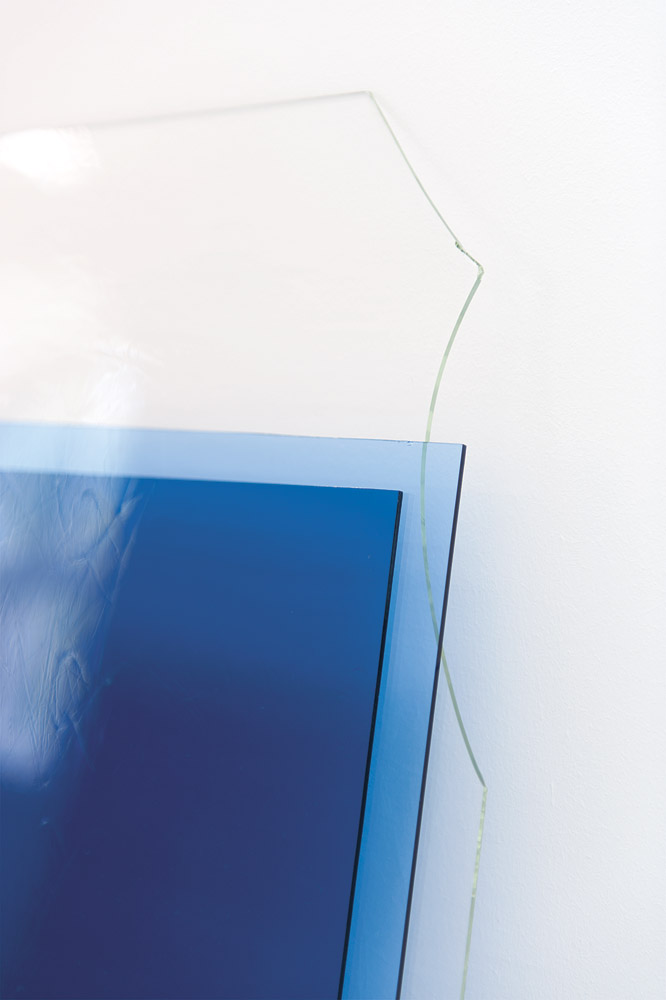 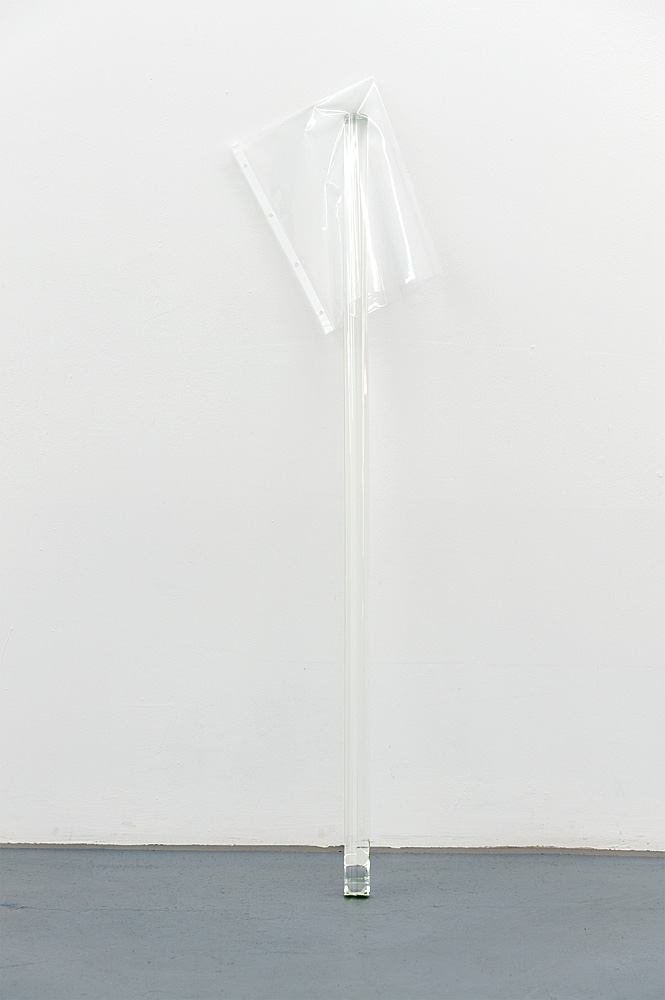 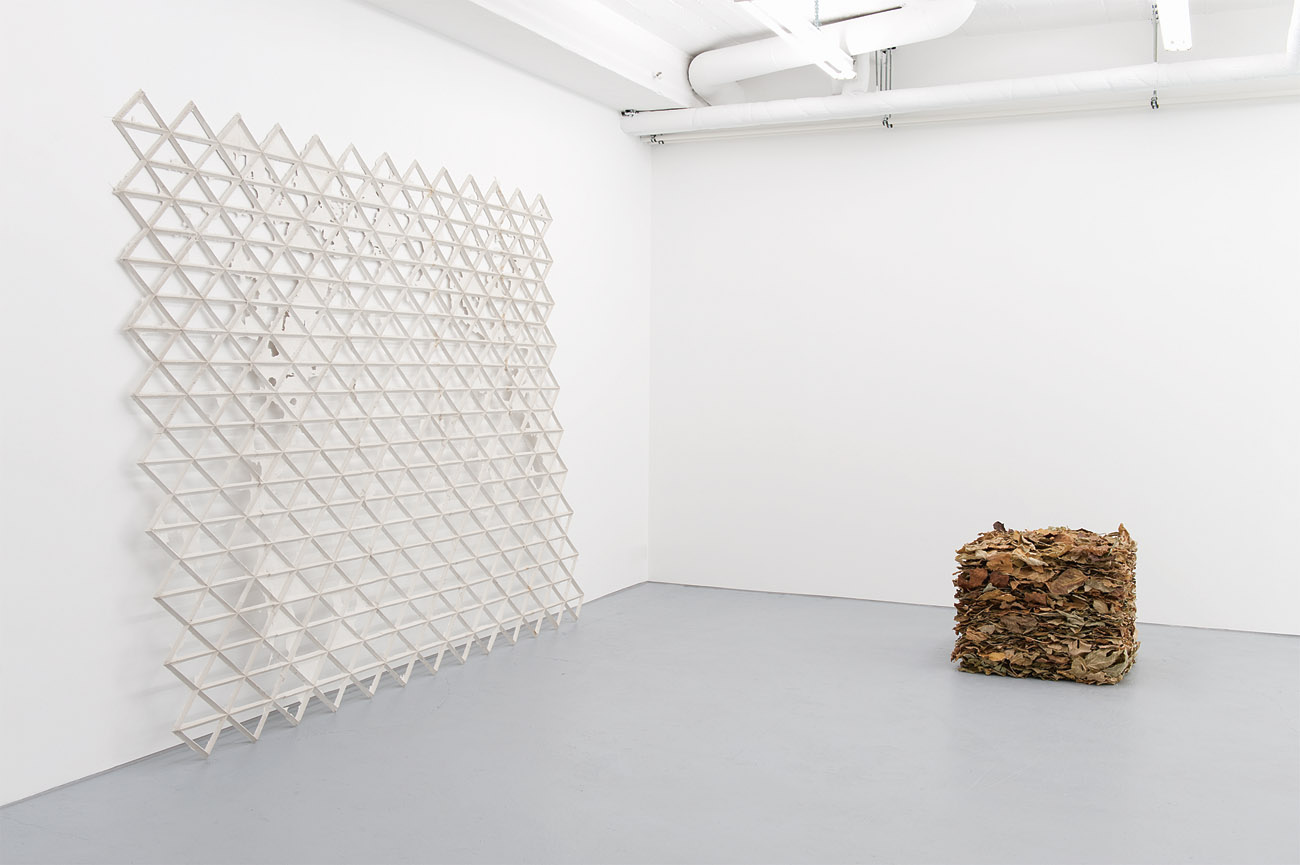 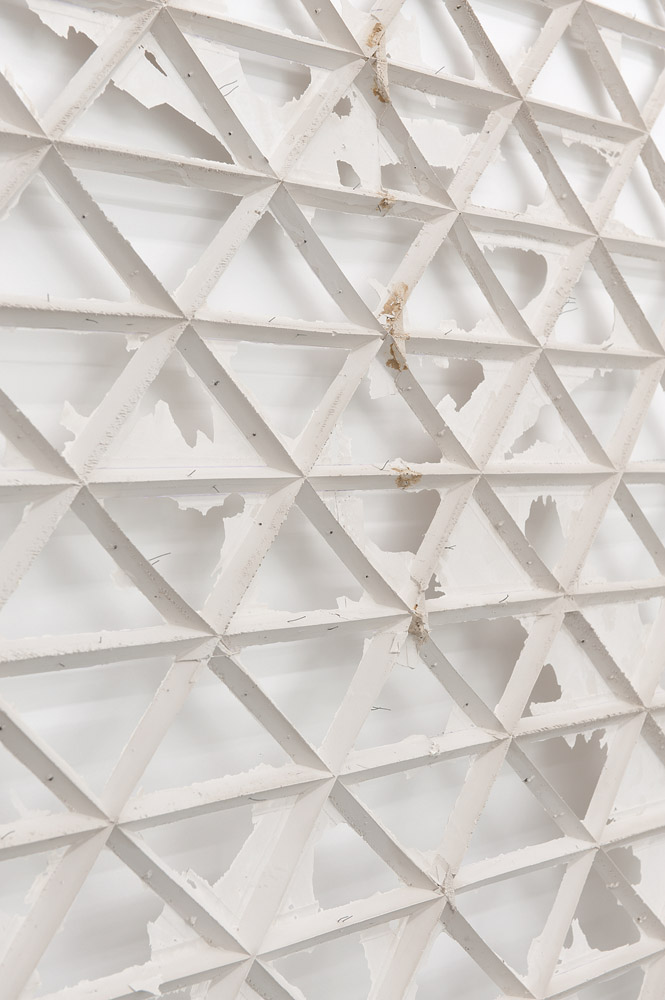 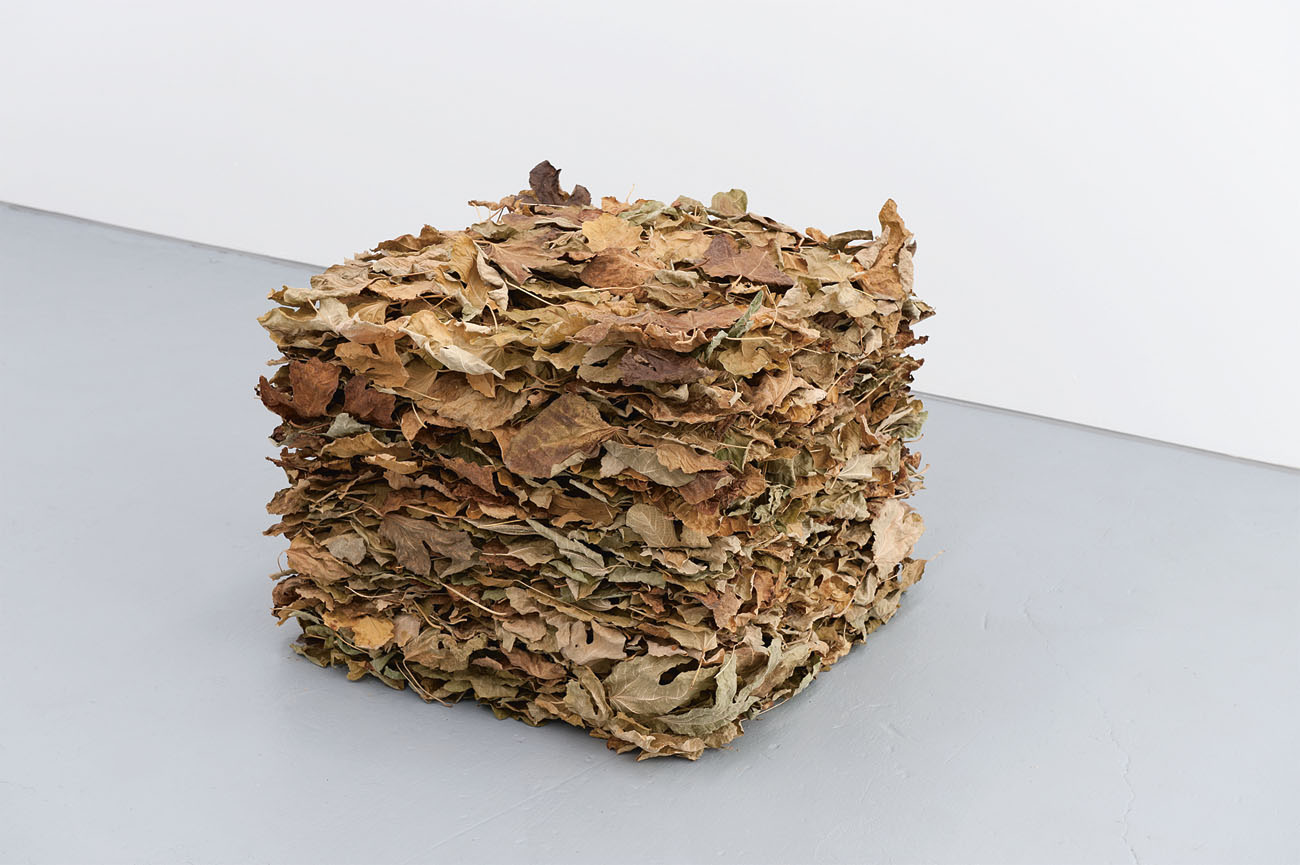 Memories of a Past Landscape

Schilf ohne Wasser (Reeds without Water) is the title of the most recent exhibition of the artist duo Wiebke Grösch and Frank Metzger. Inspired by the science fiction novel Die Abschaffung der Arten of the German writer Dietmar Dath, the artists dare to imagine same as Dath a world where the human beings have disappeared and been replaced by a new hybrid species of animals with highly modified human features. The new species called Gente, finally released from the human race, the biotechnical and machinery obsession which is characteristic for the late capitalism, celebrates the collapse of mankind referring to it as the boredom age. The human obsession with profit and the infinite accumulation of wealth that almost functioned as a religion, are issues to laugh about in the new post human age.

Same as in Dath’s novel, the new exhibition of Grösch / Metzger manages to construct a reality that wants to make the viewer aware of the possible collapse of mankind. All the new works produced for the solo show bare witness of that hypothetical human collapse. The exhibition tempts to reconstruct the world in a certain moment in time and build up what is the memory of a past landscape. Each of the objects included in the exhibition, have been carefully chosen in order to create a feeling of permanent ambivalence. Functioning both as testimonies of growth and collapse the artworks inhabit the space as paradoxical objects — a characteristic to be found as well in the title of the exhibition. Furthermore, they inherit another contradiction that of appearing simultaneously as ordinary objects and artworks, emblematic for many contemporary art works. Indeed most of the objects in the exhibition are appropriated from the everyday and partly with modifications or assemblage, introduced again in the exhibition space. The artistic strategy of appropriation widely spread among modern and contemporary artists; compose as well a significant part of Grösch / Metzger’s artistic practice. Particularly in Schilf ohne Wasser the artist duo emerges more as borrowers rather than inventors shifting emphasis from creating new content to distributing existing ones. Objects like glass pieces, leafs, book pages are taken out of the open space of anonymous circulation in order to be placed within the fixed context of the exhibition space, resembling what functions as a single installation and exhibition at the same time; contribution to the creation of what Boris Groys calls “the aura of here and now”. Groys in contradiction with Walter Benjamin and his famous essay The Work of Art in the Age of Mechanical Reproduction, notices that our contemporary condition can not be reduced to being a “loss of the aura” but is rather informed by a complex interplay of dislocation and relocations, of deterritorializations and reterritorializations, of de-auratizations and re-auratizations. Through these processes can exhibitions and installations manage to build a transitory space in order for the public to reflect upon their own conditions and reality.

Be it in their previous as well as in their recent exhibition, the philosophy of Grösch / Metzger’s artistic practice has been focussed in visualising our difficulty in understanding the evolution of the world around us; be it the formal and ideological legacies of modernism or the relation between growth and destruction in capitalism.

Three concrete sculptures resembling ruins of abandoned architectonic structures now left without roof and only two walls, make up the centre of the exhibition. Sculpture’s external sides are smooth and cold with white marks on it. On the inside the surface becomes suddenly dens marked with deep horizontal stripes and in-between them some pieces of reed can be found. The sculptures entitled Schilf ohne Wasser, bear a familial relationship to the concrete sculptures of Isa Genzken like Wabe (1988) or Kleiner Pavillon (1989) and share a certain fascination with ruin and decay to be found in work of contemporary artists like Cyprien Gaillard. Grösch / Metzger ambiguous sculptures stand both for destruction as much as for creation. They are kept in a transitory moment where it becomes difficult to understand if we are facing a catastrophe of the past or a future project.

While near the three concrete sculptures it stands a fourth one made out of a pile of fig leafs. The pile has a square shape and expends in the high almost 65 cm from ground. It is an obvious attempt to give shape and size to a decomposing material. During the exhibition we are constantly confronted with the process of shape changing and decomposition of the one sculpture and the lifeless existence of the three concrete ones.

Two drawings at first sight not connected to the above-mentioned works hang in one of the walls next to the sculptures. The blue marks result from the usage of carbon paper. Small triangle shapes next to each other are distributed irregularly on papers surface and connected with spontaneous lines. By closely observing the drawings one could first notice that the small triangles are print marks of credit cards, pieces. Thereupon all pieces in the exhibition start making a meaning altogether. The capital, the power, the crises, the catastrophe, the collapse and then a new start. Grösch / Metzger propose an exhibition with objects captured between past and future, turned in merely dysfunctional design because the society that provided them has undergone an historical collapse.

Schilf ohne Wasser with a minimalistic approach withdraws from life a complex practice and in a very delicate manner making us aware of the impossibility of structures, architectures, monuments to prevent nature from changing, life from evolving, humans from dying.